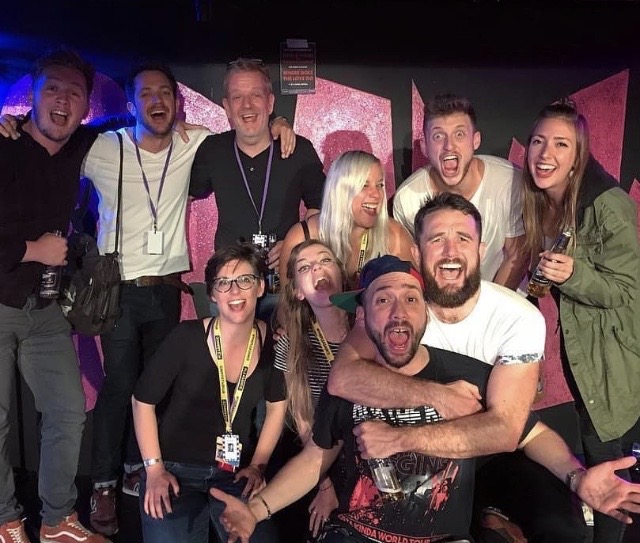 Given that Edinburgh is where I (and most of the Serious Comedy artists) would be around this time of year, I wanted to share one of my story of how my trip to the Edinburgh Royal Infirmary got one show a medical caution for audiences. But first, what’s life like under stage four restrictions in Melbourne?

Monday, was beautiful and sunny in Melbourne but with really strong winds. A perfect day for laundry! As I was trying to hang out a bed sheet, the wind caught it and as I tripped I watched the clothes rail zoom across the balcony on its wheels with the semi-pegged sheet acting as a glorious sail. It hit the end of the balcony, the sheet ripped free of its pegs and flew into the sky, very much like a plastic bag in American Beauty. It came to rest on the tree outside my house, about five metres in the air.

A passing tradesman from the construction site next door (against whom I’ve previously sworn a blood oath for their large cranes and noise) kindly offered to fetch his ladder and get the sheet down. It was the most exciting thing to have happened to any of us in the last two weeks.

Greetings from week 87 of stage four restrictions in Melbourne.

In all seriousness, it was a blow to hear that the restrictions in Melbourne are being extended, but at the same time it sounds like it’ll be the best long term solution, so I think most of us are gritting our teeth and getting through it.

During this most recent lockdown is when I’d usually be in Scotland for the Edinburgh Fringe, so many of my friends and I keep having all these memories pop up on Facebook. I love Edinburgh and the Fringe, and it looks so fun and exciting in pictures. Take a wander down memory lane with me and read an Edinburgh Fringe battle story.

It is also an endless well of the most absurd and unglamorous tales. Battle stories. My most Edinburgh story happened in 2014 – the first year I’d gone to Edinburgh, and was being the production person / gopher for some friends’ kids show. After agreeing to the trip, I found out that my new role included me being dressed as Princess Peach from Mario Brothers.

In Edinburgh itself, I was suffering from jetlag and what I thought was muscle strain from walking on cobblestones all day (they are savage). I tried to make a big effort to see shows outside of when I was working and to meet new people. One evening, I’d bought a ticket to Neal Portenza’s show in a dingey venue that in typical Edinburgh-Escherness could have been either a basement or an attic room.

If you aren’t familiar with Neal Portenza, he’s a clown character from the twisted mind of Joshua Ladgrove. It’s absurd and very smart, often with some impressive stunts. It relies a bit on confronting the audience, and sometimes involves audience participation, so it’s by far from everyone’s cup of tea, but I find it hilarious.

Then, as Neal Portenza was in the midst of a comedically calamitous on stage costume change, standing on a chair in the audience with naught but undies on and his top stuck over his head, the fire alarm sounded, triggered by the smoke from a previously chaotic magic trick. Everything about a Neal Portenza show is chaotic and broken and hilarious, and it makes it so hard to tell what might be carefully engineered, and what might be budget props giving up the ghost mid-season. So when the fire alarm went off, everyone in the audience sat glued to their chair watching Neal (in character) desperately fanning the smoke with his costume (now not on his body, but in the air) assuming it was part of the show. Even when he started yelling at us to get out. And even when the technician and a Front of House person came in to lead the evacuation.

After the brief unplanned interval, an audible argument about who was meant to isolate the fire alarm for the room, the show continued and everyone is in exhausted fits of laughter. The show ended, and we all went out into the world again. My face hurt from laughing, I had a stitch, and my make up looked much more like I’d gone through a serious breakup than just having stepped out of a comedy show.

But amongst that I still wasn’t feeling well on a base level, so I messaged a friend to meet me at the artist support area and help me find a local doctor. We met up, I chatted with a nice Aussie who was behind the counter helping people. She was a circus performer from Brisbane (we met again years later as she performed in the show of a friend of mine), and as she turned away to look up a phone number, I slumped against the bench and very slowly fainted.

Fast forward to the Edinburgh Royal Infirmary. It was FILLED with all sorts of Fringe workers who had somehow come a cropper.

I was met at the check in desk by a very dour looking middle-aged Scottish woman who wore thick rimmed, multifocal glasses  glasses which meant she looked at you from an odd angle that was slightly disapproving. She was thoroughly bored with the increase in workload brought about by the Fringe, and had probably seen every injury or mishap that could be imagined. So perhaps she was just generally disapproving and it had nothing to do with the glasses.

I’m alone as I hobble in from the taxi, and still a bit confused from fainting. I stand in front of her trying to work out what forms I need to fill out and what documentation she needs. I ask how long the wait might be as I’d just fainted and still didn’t feel very steady. She takes a long breath in, looks purposefully around the intake room filled with various festival folk all nursing injuries. Then she looks down at the book she’s writing in and says quietly, “you know some people who come in here offer me free tickets”.

I apologise and sheepishly explain I was working on a kids’ show in the Free Fringe, so we didn’t have tickets and she probably wouldn’t like the show, but if she had small children who wanted to come I could walk them to the front of the line.

She wasn’t impressed but after a while I got a bed to lie down in, which was only possibly because she didn’t want the paperwork of someone fainting in her waiting room.

A day later, I’m released from hospital with lots of painkillers, and the doctors’ best guess that I had an ovarian cyst which ruptured as a result of intense, prolonged laughing during Neal Portenza’s show. Medical grade comedy! The first group of friends I bump into on the way home from hospital hear what’s happened, and in true Edinburgh Always-On-Stage mindset, as I finished the story and without waiting to ask how I was, one of them yelled “ovaries, more like explodaries, amirite? High five!”

A few days later, my story had made its way around Edinburgh. What’s that? You don’t believe me. Well maybe it was a different explodaries woman mentioned in THIS review of the show.

Yianni Agisilaou: How to Create Your Very Own Conspiracy Theory

Guilty confessions, low-bar NY resolutions, and a return to the stage/ screen